Yowsa. Back in May of 2008, I decided to jump on the blog bandwagon. I was mostly writing about the CSA box I was getting each week. Then my friend told me about this baking group she had heard about. A woman named Laurie received a cookbook as a present and put out a call to her friends to see if anyone wanted to join her in an ambitious project. They had started in January and were baking a recipe a week from a book by Dorie Greenspan called Baking: From My Home to Yours. Sure, I thought. I love to bake. I signed up that week. And I was hooked. (Almost) every Tuesday, I baked along with a great group of bakers. I think in our heyday there were close to 400 bakers.
Now it's December of 2011, and there is a small but solid core of bakers who are finishing the book with us. We realized about six months ago that we were nearing the end. This week, Laurie and I are hosting two of the last three recipes. She made Unbelievably Good Chocolate Blueberry Ice Cream. You'll have to check out her blog to see how delicious it looks.
I made the Puffed Double Plum Tart, and I'm sorry to say that mine doesn't look so good. I think I might have used too much syrup, or I tried to put on too many dried plums (prunes for the rest of you). My puff pastry did not puff. It was Trader Joe's all butter puff pastry, and the other sheet that I used later that day to make a different dessert worked better, but it was not as puffy and the photos on the box would lead me to believe it should be. Maybe it was a combination of only ok puff pastry and user error. The flavor of the plum tart was lovely on the edges. The middle was just kind of goopy. Also, it's December in Chicago, and there is not a fresh plum to be found. I used pear instead. I tried to get artistic with my fruit arrangement. If you loosely interpret artistic, it works.
Something did not go well here. Bah and sigh. 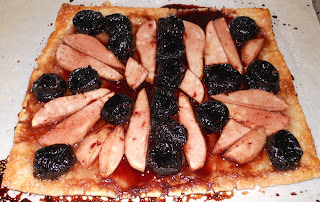 I would absolutely try this one again when plums are in season. Thank you to Laurie for her great idea and mostly for a lovely friendship that has blossomed. Thank you to Dorie for writing an amazing cookbook. Thanks to all the bakers for the suggestions, cheers, and gorgeous desserts. We're starting another fabulous book in February (Baking with Julia) Keep an eye out on the TWD site if you'd like more information or if you'd like to join us.
Puffed Double Plum Tart
For the topping:
1/2 c. hearty dry wine, such as Chianti, Rioja or Cabernet
2 wide strips orange zest
juice of 1/2 an orange
2 1/2 T. sugar
1/2 piece star anise (or one 1-inch piece cinnamon stick)
about 18 pitted prunes (dried plums)
about 10 Italian prune plums, halved and pitted
For the pastry:
1 8-ounce sheet frozen puff pastry, preferably all butter
1/2 T. unsalted butter, at room temperature
sugar
1 T. heavy cream or whole milk
To make the topping: Bring the wine, zest, orange juice, sugar, and star anise to a boil in a small saucepan. Boil for 1 to 2 minutes., then add the prunes and boil for 3 minutes more. Remove the pan from the heat, cover, and let steep for 15 minutes.
Using a slotted spoon, transfer the prunes to a bowl. Return the saucepan to medium heat and boil for another 5 minutes or so, until the syrup is reduced a bit and slightly thickened. Remove from the heat, cover, and set aside.
Getting ready to bake: Center a rack in the oven and preheat the oven to 400 degrees F. Have a baking sheet at hand, as well as a sheet of parchment paper or silicone mat.
To make the pastry base: Working on the parchment paper or silicone mat, roll the puff pastry into a 9 x 10 inch rectangle or a 9 or 10 inch square - the dimensions are up to you, although if you change the size too much, you may have to adjust the amount of fruit. Lift the pastry, still on its paper or mat, onto the baking sheet. Smear the butter over the surface of the dough, leaving a 1 inch border bare. Sprinkle the buttered area with about 1 t. sugar.
Arrange the prunes and fresh plums in rows across the pastry, leaving the un-buttered border bare. I like to alternate dried and fresh plums and to alternate cut side up and cut side down fresh plums. Using a pastry brush, lightly dab the fresh plums with a bit of syrup. Brush the border of the puff pastry with the cream and sprinkle with about 1 T. sugar.
Bake the tart for 10 minutes, at which point the borders will have puffed some. Reduce the oven temperature to 350 degrees F, and bake for another 15 minutes, (total baking time is about 25 minutes) or until the fresh plums can be pierced easily with the tip of a knife.
Cool the tart on the baking sheet for about 5 minutes before cutting it into quarters and serving with the poaching syrup.
Playing around: The plum duo, complete with wine syrup, can be used as the fruit in the French Pear Tart (p. 368) it's a natural with the almond cream filling.
Posted by Jules Someone at 1:00 AM

I made the ice cream this week. I don't think your tart looks bad--I suppose no one would know unless they got some of the goopy part. ;) Thanks for all your work with the group!

Ciao Jules, I think the pears were a nice idea, I liked mine and sure would had loved yours (the edges are really appealing...)

I made this when I spied some Italian prune plums at the store and it was absolutely lovely. Keep it in the queue for when plums are ripe again. I think pears + prunes with that delicious syrup sound really good.

Jessica of My Baking Heart said...

It's hard to believe that such a wonderful recipe wasn't chosen before now. I wold love to try it when plums are in season too.

Still looks like a cool design! Ahh- I can't believe we only have a few recipes left! crazy

It was really good with plums. Mine was a little goopy in the middle too, come to think of it. Anyway, good pick!

I think your fruit combo looks nice! Too bad about the puffing, but as all of us TWD bakers know, not every recipe will turn out great.

Thanks for everything you've done for the group - it's sad to see it come to the end, but we all have some great memories.

Yes, try again with plums when the warm weather rolls back around. I liked this one, so even tho there wasn't much to choose from thanks for the pick. And thank you for keeping the group running so smoothly for all these months!!

yay us!!! the "small but solid core" of twd bloggers. it's been great. thanks for all the comments over the years! merry christmas!