The Girl and Boy both have birthdays in April.  She turned 11 and he turned 9.  We have a very fun tradition at our house.  Birthday mornings = cake for breakfast!  (Just a side note - you know who doesn't get cake for breakfast....)

The Girl requested carrot cake with cream cheese frosting.  I went with the newest recipe in Cook's Illustrated.  Truthfully, it was delicious but it was seriously ugly.  The cake was too delicate for the frosting.  I kept pulling up swaths of cake with each swipe of frosting.  Still, The Girl was happy. 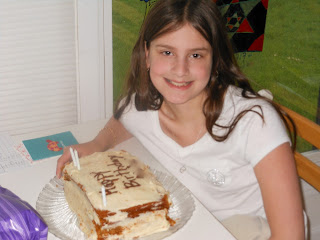 The Boy asked for chocolate cake with peanut butter frosting.  His cake was smaller because there was a baseball game (where we gave all the players cupcakes) and a birthday party (more cupcakes and a cookie cake).  Delicious! 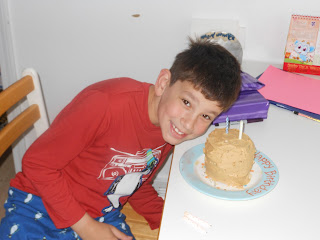 It was a lovely month all around.  And thank goodness that it's over.  ;-)

This recipe appeals on SO many levels.  First of all, there are only six ingredients to the shortbread.  It is rich, buttery, crumbly, and smells amazing when it's baking.  Second, you fill the middle with a rhubarb jam.  Rhubarb.  I have long documented my love of all things rhubarb.  This falls firmly into the WIN column.

The recipe was originally baked with Julia by Gale Gand.  She is a wonderful pastry chef who happens to live a couple of towns over from me.  I've had the very good fortune to see her bake in person and to enjoy her treats at one of her Chicago restaurants.

April is birthday month around here, so there has been a lot of cake baking.  (Look for that in another post ;-)  I wasn't sure I was going to get to this one.  Then I re-read the recipe and realized how simple it was.  I did end up making a few modifications in the name of time saving.  First, I cut the recipe into fourths.  We have cake, cupcakes, cookies, and more cupcakes already in the kitchen.  I didn't want to pass this up, but I didn't need a whole pan.  I initially was going to make this in my 6" square pan.  As I was reaching into my cabinet, I noticed my 3 - 3" round pans.  Oooh, this could be good.

The dough came together in a snap.  As I finished blending in the flour, I couldn't help but notice that the dough was in lots of small crumbles.  Hmmm.  Instead of squishing them together, freezing the dough, and then grating it, I covered the bowl and put it in the fridge to chill.  An hour later, I greased my mini pans, crumbled in some of the crumbles, and did a 10 minute pre-bake.  (Some of the other bakers commented that the bottom layer didn't always bake through to the shortbread texture that they were after and a pre-bake helped with that.)

Lucky for me, I usually have some rhubarb compote or jam in my fridge.  That went on top of shortbread #1.  #2 got a layer of Scotch marmalade.  #3 was filled with orange/vanilla marmalade that I made over the winter.  The rest of the dough was crumbled on top and they went back into the oven. 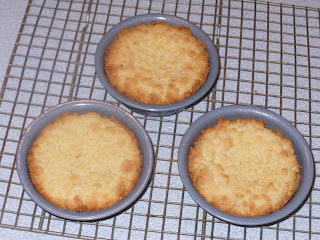 Those crispy brown edges are calling to me. 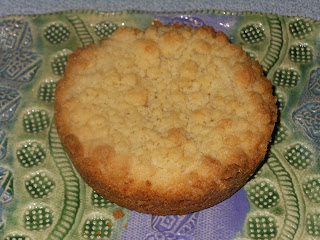 This little baby shortbread just begging to be eaten.  Which we haven't done yet because I made these too close to dinner. 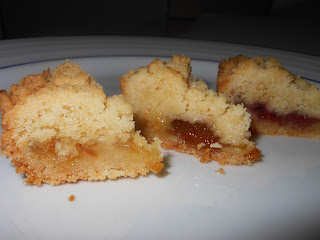 These are very good.  The best bite, as voted on by the family, was the rhubarb/berry version.  The orange/vanilla version came in second.  The scotch marmalade was a bit much for all of us - even the scotch drinker.  I could so easily see making these in a mini-muffin tin for a bite-sized treat.  If you'd like the recipe, go check out Lynette at 1smallkitchen or Cher at The not so exciting adventures of a dabbler...
Posted by Jules Someone at 1:00 AM 23 comments: