I'm pretty sure I've made my feelings about brownies pretty clear. I like them, but they seem to be ubiquitous. Remember, these are the only baked good where I'll willingly use a mix. Here's what's interesting about this week's recipe -- I'm not too much of a cheesecake fan, either. If I never ate it again, I don't think I'd miss it. It's not something I crave or seek out. If it's there, and there aren't other better choices I'll eat is.
Which is why I was so surprised that I liked this recipe as much as I did. And I really really like this dessert. It was fairly low on the Dorie fuss factor. I really only needed two bowls and then the pan to bake it in. I followed the recipe almost entirely. The one change I made was to substitute a good bittersweet/orange/almond chocolate for the plain chocolate. A) I had it and B) it sounded like it would work. Oh yeah, and I skipped the topping. Again. This seems to be a habit with me lately. Truthfully, it wasn't missed.
This called for ingredients that I already had. (Psst. If you haven't discovered and purchased espresso powder from King Arthur Flour, you should) The chocolate was probably an impulse buy at one point. The brownie layer is made first. Then the espresso cheesecake. Most of the brownie batter gets spread into the pan with the cheesecake batter next. Mine seemed awfully runny, so I was a tad worried. I don't think I kept out enough brownie batter. My swirls are kind of pitiful. I took these out when they were slightly brown and pulled away from the pan. Just like Dorie said!
The testers really enjoyed this one. The boy was not as enthusiastic. I would certainly make this again. I really liked the way the flavors played against each other. The coffee taste was clear but not overwhelming. The orange added a nice element, and I liked the slight crunch of the almonds. Maybe next time a plain chocolate and add some cinnamon?
Here they are in the pan. They REALLY pulled away from the side. Not so swirly. 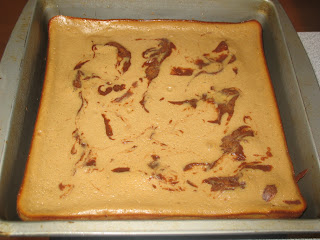 Here's one piece. I really need to work on my food photography. 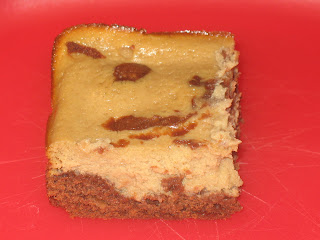 And another piece. Still not so swirly. 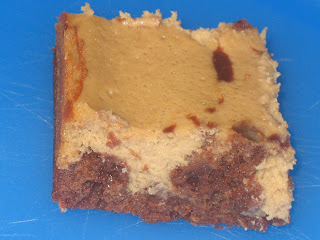 Thank you Melissa of Life in a Peanut Shell for choosing this yummy dessert.
Posted by Jules Someone at 1:00 AM

Glad you enjoyed these! They look great!

For someone who went into this recipe with as much trepidation as you did, the brownies certainly seemed to be a success.

I like the way they pulled away from the sides. Mine did the same thing. I loved this recipe and Im glad you enjoyed it too!

I'm so glad that you liked these even as a non-brownie lover. I really enjoyed them too, even though I didn't totally love the brownie part. This is definitely a keeper in my book! Yours look great!

hehe. I am working on my food photography as well. :) Orange sounds like a delicious addition to these!

So glad you liked them!

I haven't tried mine yet, looking forward to a nibble as tonight's dessert.

They look great! Glad you liked them, especially when it doesn't sound like you're a brownie person :)

I happen to feel indifferent like you do about cheesecake, and also happened to love these cheesecake brownies. Yours good great and I am glad you enjoyed them so much!

Your brownies turned out great. I agree with you about the ubiquitous nature of brownies.

Well you got swirls! All my chocolate sank to the bottom and I tried to guess where that might be and swirl a bit, but nothing, not one single swirl! Oh, well, guys loved them anyway, and I mean they really loved them! Yours look lovely and happy they were also a big hit at your place, especially with your views on brownies and all!

Looks yummy. I didn't understand the "pull away from the side" instruction until I saw it happening and knew that they were done! :) Great job!

mine werent all that swirly, but they tasted good. good thinking to leave the sour cream off, I wouldnt use it next time

swirls don't matter as long as you liked the taste!

It looks like these turned out very well for you. Almonds are an interesting twist!

mine weren't very swirly either but still managed to be pretty... as are yours :)

Glad you liked these. I can say with conviction that I've liked each taste better than the one before...and yes, I have eaten far too much of them.

The chocolate you used sounds yummy! Glad you enjoyed these!

I was happy to see my brownies pulling away from the sides, too. It doesn't always happen when Dorie says it should. Your brownies look great!

I feel exactly the same way about cheesecake and I ended up thinking these were pretty good too! I think the swirl looks great! I am almost out of the espresso powder I bought a year ago, so I'll try KA next time.

glad this was a hit! we sure have made a lot of brownies from this book!

I can relate to the swirling issue. My brownie batter was too thick to swirl. I also never got around to putting the top layer on before they disappeared -- guess we liked them! I like your idea of a hint of orange, too.

No swirl on mine - marbled. But still good.